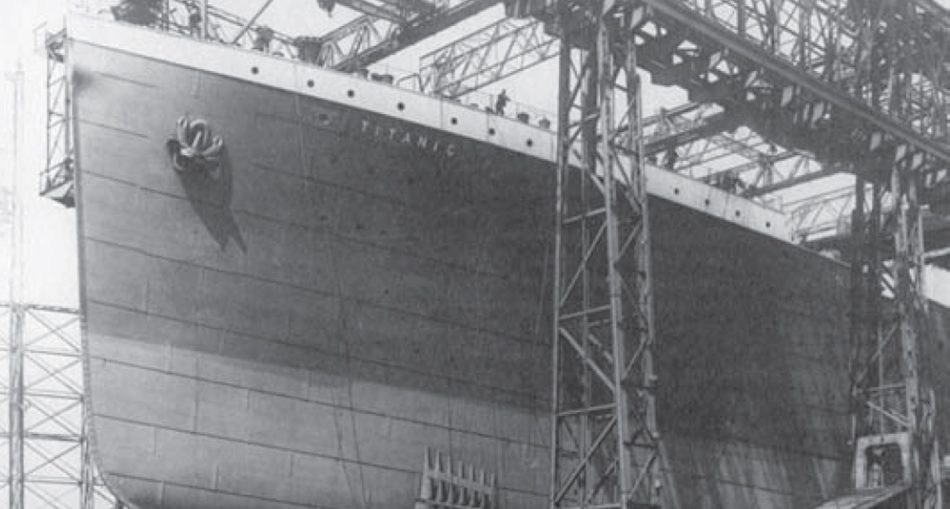 INTRODUCTION
Everyone knows something about the fate of the Irish built ship the Titanic. It struck an iceberg and sank. Many people lost their lives. There were not enough lifeboats. We all know something about the sinking and the subject continues to interest people right to this very day.

Why? Why does the Titanic hold such a worldwide fascination? It may be that it forced people to look again at the class structure because it became clear that not only did wealth and prestige mean a better lifestyle but also that the ‘top’ levels of society were considered too important to be lost in a crisis. People then and since were fascinated with the technical achievement of the Titanic but had this achievement and the arrogance that went with it led man to challenge the immutable laws of nature? After all didn’t Bruce Ismay state ‘God himself could not sink this ship’.

Was it a case of pride coming before a fall? They were wrong. It was sinkable and all it took was a frozen piece of water. There are many myths surrounding the ship, ranging from supernatural warnings of danger through to the belief that all women and children were offered places on the lifeboats first. Many people believe that the latter is a fact but fortunately many Titanic historians have proved otherwise. The women and children in third class were never given a chance. Most of them were kept behind locked gates. Gates which were guarded by crew members who were obviously ordered to do so.

Maritime historians sometimes claim that no blame can be attached to these sailors as they were only carrying out orders, but when it is known that orders are wrong, they must be disobeyed. It is our belief that this was one such occasion. Everyone should have been given a fair chance of survival. It took over three years research to compile this small publication. Every main Titanic publication was read as were hundreds of newspapers reporting the disaster. Almost every Titanic video and documentary was watched over and over again to try and find the answers to the questions which the following pages raise. Original Belfast newspaper reports are used to describe the creation and launch of this great ship, and these give a clear indication of the pride which we in Belfast had in our latest creation. Unfortunately this euphoria was short lived, as the Titanic’s first voyage was also to be its last. This publication makes disturbing reading and it will shock, but I make no apology for it.

I feel that the truth surrounding the Titanic’s third class passengers must be known. This publication is not the result of any major historical break-through. It is simply the result of very careful study of previous Titanic material and I feel that if anyone deserves credit for exposing the true fate of these passengers then it must be Walter Lord. Mr Lord devoted much of his life to studying the Titanic and interviewed many of its survivors, the result being his informative book A Night to Remember.

Lord was one of the first to expose what happened to the third class passengers and in the film, which was based on his book, graphic images were created showing disturbing scenes of third class passengers being locked in while passengers in other sections of the ship freely entered the lifeboats. This publication is not printed to answer the ‘unanswered.’ Its role is simply to record the questions so that they will never be overlooked by future Titanic historians.